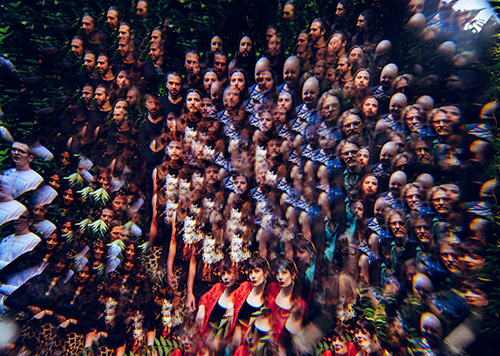 NEPTUNIAN MAXIMALISM, a.k.a. NNMM is a community of multi « occultural engineers » (*Genesis P-Orridge) with a variable geometry/line-up.
This project was initiatedby Guillaume Cazalet (CZLT ; SOL KIA ; ZAÄAR) and the veteran saxophonist player Jean-Jacques Duerinckx (ZAÄAR ; Ze Zorgs) in Brussels in 2018, especially during a residency withthe two drummers Sebastien Schmit (K-Branding) and Pierre Arese (AKSU). The result was abifacial entity, sometimes calling for a primitive voodoo trance with percussive intonations,dominated by rhythm and a savage movement, sometimes towards a psychedelic meditation with prophetic and spiritual accents resting on an amplified drone music where time is explored, harmony, the power of the tonic and its iridescent harmonics, durability, weight, ruin.

From this residency were born a trilogy album called ÉONS released on I,Voidhanger Records,dedicated to the Sun, the Moon and the Earth and a first album, The Conference Of The Stars, released on the label Homo Sensibilis Records, mixing drone metal and spiritual free jazz, animated by a cosmic and psychedelic energy.
Between 2019 and 2021, Reshma Goolamy, Romain Martini, Didié Nietzche (48 Cameras,Radio Prague), Joaquin Bermudez (Phoenician Drive), Alice Thiel, Stephane Fedele & Lukas Melville (CUSSD) joined the project that takes the form of an “Arkestra”. Since their last performance at the Roadburn Redux (2021), the collective now purpose several piece of work consisting in various line-ups and multiple sound/space explorations, depending on the venue conditions, like their «Moon Arkestra» (Roadburn line-up), their «Drone Arkestra» (quintet) or their "Solar Drone Arkestra" for exemple. In this way they can maximize their musical researches, following the rules of improvised music consisting in unexpected things.

By exploring the evolution of the human species, particularly through the use of speculative texts in Homo-sapiens prototypal language (*Pierre Lanchantin), they question the future of the living on earth. They try to create a sense of acceptance of the end of the "Anthropocene" era through a musical experience.